Posted on January 6, 2010 by Norm Fisher, Royal LePage Vidorra
The Saskatoon Region Association of Realtors recently reported December 2009 results for the entire residential categoryof Saskatoon real estate that includes single-family homes, condominiums, semi-detached properties, duplexes, mobile homes and vacant lots. Unit sales totaled 211 properties across all of these property types, at an average selling price of $291,554. Let’s have a look at how houses (single-family detached homes) and condominiums did in comparison to the entire residential category.

Single-family detached homes (houses) continued on a seasonal downward trend following the same path as last year. Unit sales totaled 137, a hefty drop from the previous month when Saskatoon real estate agents reported 168 houses sales, but well ahead of last December’s sales of just 109. Active house listings declined even faster falling from 503 at the end of November to just 355 by year-end, nearly fifty percent fewer than were available at the close of December of 2008. The drop in inventory levels is even more pronounced when viewed as “months of inventory” available, falling from 6.2 at the end of 2008 to just 2.6 by the close of 2009.

As inventory found its way lower, prices moved higher. The average selling price of a Saskatoon house recovered from a pretty good dip in November and increased from $300,153 to $328,083 over the month, nearly twenty percent higher then it was for December of last year. It’s important to note that the average size of the homes, which sold also increased by ten percent on a year-over-year basis so a good portion of that increase can be accounted for in that factor. Still, the three-month average moved up by more than seven thousand dollars from one month to the next and the median moved nearly seventeen thousand dollars from last month.

The average price per square foot paid for a Saskatoon house also moved back to October levels after dipping in November. The average came in at $253 per square foot, up eight dollars from the previous month and twenty-two dollars higher than the same month in 2008. 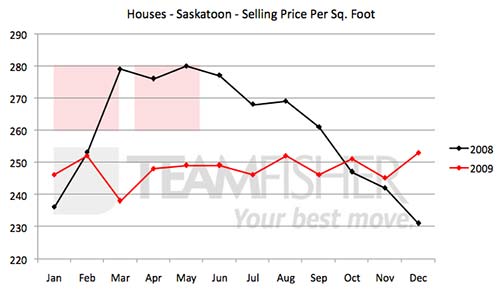 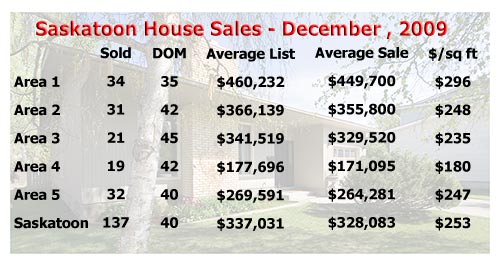 Sales of Saskatoon condominiums fell to sixty-two units, down fourteen from the previous month but ahead of 2008 when forty-four properties traded hands. Active inventory dipped from 292 at the close of November to 255 by the end of the year, a decline of roughly thirty-three percent from the year before when 381 condo sported a for sale sign. “Months of inventory” for Saskatoon condominiums fell more than fifty percent over the past twelve months from 8.7 months last December to 4.1 months today.

While larger single-family homes were popular in December, smaller condos won more sales this year. Condo prices moved lower on the month, and on the year, in spite of a significantly improved inventory situation. The average selling price of a Saskatoon condo dropped about thirteen thousand dollars compared to November to reach $228,832, roughly eight thousand dollars lower than last December. The three-month average was stable from one month to the next at $224,593, but down forty-five hundred dollars from December of 2008, while the median selling price gained thirteen hundred dollars from a month ago and six thousand dollars on the year.

The average price paid per square foot for a Saskatoon condominium slid six dollars from November to finish at two hundred and twenty-four, up five dollars from December 2008, and higher on a year-over-year basis for the second month in a row. 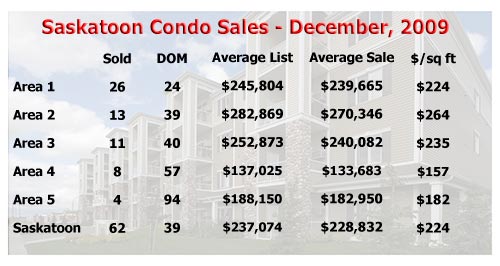 Remember, averages and cost per square foot numbers can provide some useful insights into pricing trends but they’re not as useful when engaging in an actual transaction. If you’re buying or selling you should be seeking current information on active listings and recent sales, which are most comparable to your property in terms of location, size, features and amenities. I’m always happy to answer your Saskatoon real estate questions.  All of my contact info is here. Please feel free to call or email.