Posted on February 5, 2010 by Norm Fisher, Royal LePage Vidorra
The Saskatoon Region Association of Realtors recently reported January 2010 resultsfor the entire residential category of Saskatoon real estate that includes single-family homes, condominiums, semi-detached properties, duplexes, mobile homes and vacant lots. Unit sales totaled 179 properties across all of these property types, at an average selling price of $270,191. Let’s have a look at how houses (single-family detached homes) and condominiums did in comparison to the entire residential category.

Single-family detached home (houses) sales fell flat in Saskatoon during the month of January, finishing with just one hundred and fifteen firm sales, lower than December by nearly two-dozen units and well off of the one hundred and sixty-four properties sold in January of 2009. The inventory of available houses edged higher by thirty-one units from the previous month to three hundred and eighty-six homes. Lower sales and a larger inventory pushed the absorption rate (months of inventory) up nearly a full month to 3.4 and while remaining on the low side of “normal” reached its highest level since April of 2009. Active listings remained well below levels seen last year when buyers had six hundred and eighty-eight single-family homes to choose from. 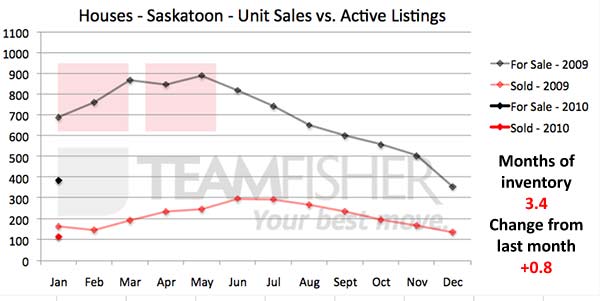 The average price per square foot paid for a Saskatoon house also fell, though not as sharply as the other measures. Saskatoon home buyers paid $248 per foot in January, down five dollars from the month before, and just two dollars more than the average in January 2009. 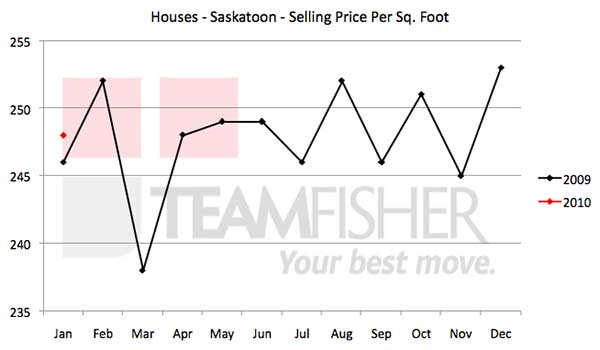 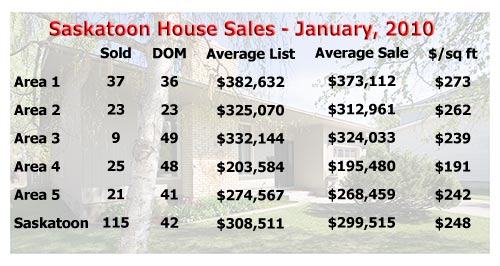 Sales of Saskatoon condominiums also slipped from the month before but managed to eek out some modest year-over-year gains as a total of fifty-eight units traded, just four fewer than December, and fourteen properties higher than the same month in 2009. Active listings finished lower by just three units when compared to the previous month with just two hundred and fifty-two available homes, down from three hundred and sixty-three a year ago. Months of inventory remained steady from one month to the next, and year-over-year at 4.3.

The average price paid per square foot for a Saskatoon condominium was higher than last month by three dollars reaching $227, a gain of fourteen dollars from the previous January. 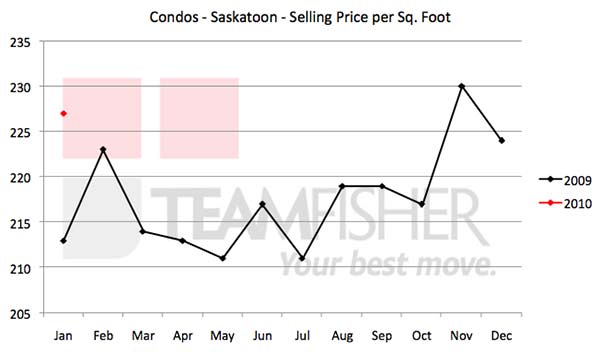 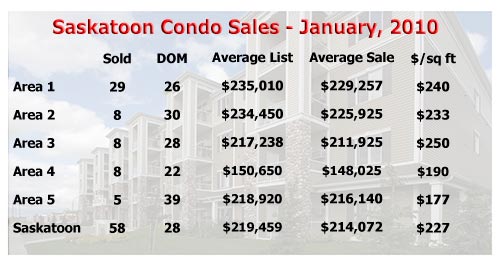 Remember, averages and cost per square foot numbers can provide some useful insights into pricing trends but they’re not as useful when engaging in an actual transaction. If you’re buying or selling you should be seeking current information on active listings and recent sales, which are most comparable to your property in terms of location, size, features and amenities.