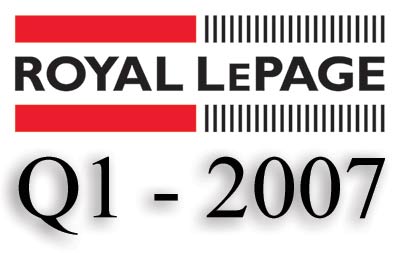 SASKATCHEWAN, March 29, 2007 – Strong in-migration and high levels of consumer confidence led to unprecedented levels of demand in Saskatchewan in the first quarter, causing average house prices to rise by double-digits in all surveyed housing categories, according to a report released today by Royal LePage Real Estate Services.

The economy in Saskatchewan remains bright, with employment opportunities in a variety of sectors.Increased demand for housing across the province has resulted in some typically less popular neighbourhoods receiving a lot of attention, as buyers extend their search outside of traditional ‘blue chip’ areas in order to satisfy their housing needs.Despite significant increases to average house prices in the first quarter, housing in the province remains among the most affordable in the country.

In Regina, the housing market got off to a brisk start in 2007, as in-migration to the city fuelled strong levels of demand.Listing inventory remained tight throughout the quarter, pressuring house prices upwards, resulting in a significant number of multiple offer situations.

Properties traded hands quickly throughout the quarter, with the number of listings available unable to satisfy pent-up demand from buyers.

“We have seen strong in-migration to Regina in the first quarter, particularly from the Western provinces, as people are drawn to the city for abundant employment opportunities, an excellent quality of life, and some of the most affordable housing in the country,” said Mike Duggleby, manager, Royal LePage Regina Realty, Regina.“Many purchasers who are relocating from Alberta or British Columbia have accumulated enough equity from their past homes that they can pay for a new home in cash, with money left over to purchase a recreational property.”

Move-up buyers were the most active purchaser group during the first quarter, with all areas of the city remaining in high demand. Washington Park, an area which has typically catered to low-income housing, saw an upswing in activity, as purchasers from outside the province snapped up inexpensive homes with the purpose of using them as income-generating rental units.

In Saskatoon, strong in-migration, particularly from the Western provinces led to unprecedented demand for housing in the first quarter.A steady supply of properties came on the market throughout the quarter, however listings moved through the system quickly and were unable to satiate purchasers’ demand.

Many former residents of Saskatchewan have been drawn back to the province by the abundance of employment opportunities in a variety of sectors and relatively affordable cost of living.The housing market in Saskatoon has also started to attract out-of-province purchasers, looking to invest in income-generating properties such as multi-unit apartment buildings, duplexes and condominium units.

“Saskatoon is typically a market which is characterized by slow and steady increases in average prices,” said Norm Fisher, sales manager, Royal LePage Saskatoon Real Estate.“The conditions which have emerged in the first quarter are typical of a large Western city.Momentum in the housing market seems to be picking up weekly, with well over half of all homes selling at, or above, list price.”

Demand for all housing types has been strong throughout the first quarter, with a particular strength shown in the condominium market, as many first-time buyers appear eager to purchase a home before prices rise outside of the range they can afford.Some areas that previously had been considered less desirable saw an upswing in activity in the first quarter, as some purchasers were forced to look outside their preferred neighbourhoods in order to secure a home.

In the East End, the average price of a detached bungalow rose by 36.1 per cent to $245,000, year-over-year.The average price for standard two-storey homes also increased, rising by 31.0 per cent from the same period last year to $275,000.