Saskatoon home sales saw a small weekly bounce as local REALTORS® reported 78 residential sales to the multiple listing service®, up 10 from last week, but lower by 14 when compared to sales for the same week last year.

The new listing activity also pushed higher, this week growing by four units to reach 154. We closed the week well down annually. Over the same period last year, 200 Saskatoon homes were listed for sale on the MLS®. 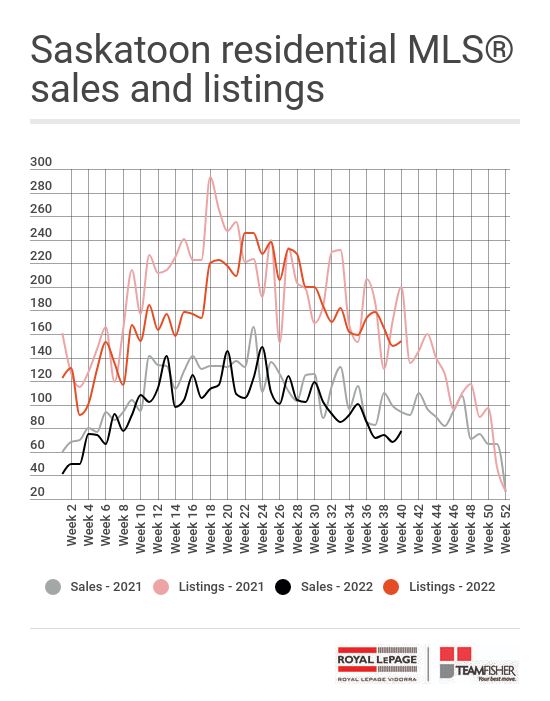 After five weeks with very little change from one week to the next, the total number of Saskatoon homes showing an active status on the MLS® finally slipped lower. As of this morning, there at 1171 residential properties for sale within city limits, down 26 from last week’s close, and lower annually by 164 properties.

On the heels of a listing surge, last week, that produced to first year-over-year increase we had seen in the single-family homes category in close to two years, we closed this week with 708 Saskatoon houses for sale. That’s lower than last week by 22, and down two from where it stood a year ago.

Condo inventory slipped 14 from last week to 391, to close the week lower annually by 152 units.

The number of Saskatoon homes to have sold over the most recent 30 days fell modestly lower, this week closing at 327 units, down just two from last week. This pushed “months of inventory” (MOI) modestly lower in two of the three categories we track. 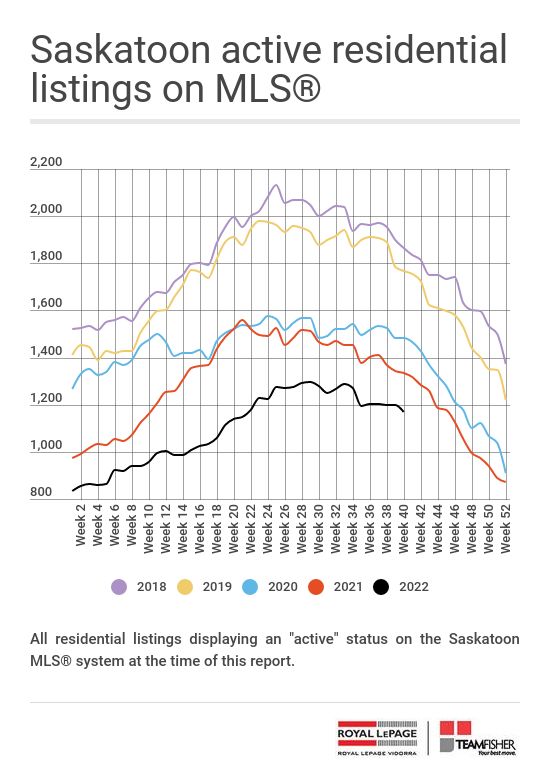 A surge in entry-level activity pushed the median sale price and the average sale price for the week sliding to their lowest levels this year. The median for the period was down 17K to $297,000. The average for the week took a huge tumble, falling more than 70K to just $323,283.

The six-week average price took its second consecutive decline, this week falling close to eleven thousand dollars to settle at $361,646. That is the lowest recorded number since the final week of March, but it’s still higher annually by about 5K.

The four-week median price continued to trend lower as it has been now for six weeks. It closed the period at $336,000. That’s lower than last week by nearly $7,000 and falls below the number recorded this same week last year by almost $4,000.

The number of homes that sold for a price greater than the listed price slipped lower to just five. Those five deals generated an average bonus of $13,150 thanks to one sale that was $35K above the asking price. Meanwhile, 67 deals were reported to have sold at less than the asking price by an average of $12,887.

Here is a breakdown of what the sales to listing price ratio looked like on this week’s sales. Please note that this chart may show over-list price sales, even when I have reported the number as 0. Those sales are typically new properties that spent some period of time on the market, and most likely sold and included additional improvements that were not reflected in the original list price. For example, a new home listed at $450,000 sells at a price of $490,000 after 120 days on the market may have included a basement development that was not anticipated in the listing price. We report these to you as “at list price sales”, which is likely too generous in some cases, but it’s simply not practical to obtain the full details of each sale. A description of the geographic boundaries of areas 1 through 5 is here.