After coming back with a vengeance during the first week of 2011, new listing activity slowed again for the second week in a row as Saskatoon real estate agents brought just ninety-eight single-family home and condominium listings to the local MLS® system. The weekly totals mark a week-over-week decline of fifteen properties, and twenty-five fewer homes than were offered for sale during the same week last year.

MLS® sales activity in the house and condo categories continued to edge higher gaining six over the previous weekto close at forty-eight, up three home sales from the same period last year.

Slightly stronger sales and weaker new listing activity didn’t stop the inventory of residential listings on the multiple listing service® from moving higher for the third consecutive week. Total listings edged up twenty-two from last week to close at 927, or roughly twenty-three percent higher than it was at this time last year when 751 residential properties were available on the Saskatoon MLS® system. On a weekly basis, single-family home listings gained nine and reached 501 while condominium listings pushed higher by thirteen to 376. Last year at this time there were 416 single-family homes and 290 condos showing an active status on our MLS®.

Listing cancellations and withdrawals held steady at fifteen and only five of those were relisted on the same day that the previous MLS number was retired. Another twenty-seven Saskatoon home sellers adjusted their price hoping to attract a motivated buyer.

Once again, the Saskatoon real estate market saw just a small percentage of home sales with reported final sale prices above the list price. Two sellers managed an above list sale picking up an additional $3,650 on average, while forty-four of forty-eight transactions registered a final sale number below the asking price by an average of $9,834. 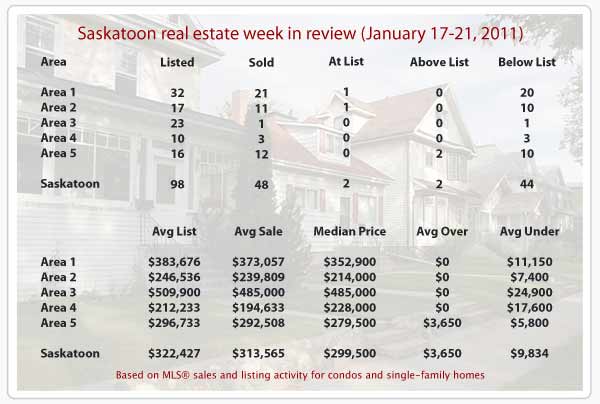 New mortgage rules introduced this weekare expected to encourage those seeking a thirty-five year amortization to move on a purchase before the changes that take effect on March 18 make that impossible. Finance minister Jim Flaherty’s ultimate objective is to remove “marginal buyers” from the market, reducing the number of home owners who may suffer financially in a higher interest rate environment when rates eventually rise. The other changes that came down with this package are targeted more at managing the home equity line of credit (HELOC) market. Effective March 18, home owners will be limited to withdrawing equity equaling up to eighty-five percent of the home’s market value. The current rules allow a withdrawal of up to ninety percent. Further, on April 18, CHMC will cease to offer mortgage insurance on HELOC’s.

Our Saskatoon home search tool offers MLS® listings from all real estate brands with the most detail and information available anywhere. Check it out here.