Posted on April 3, 2010 by Norm Fisher, Royal LePage Vidorra
Posted in Market News
Just as the Saskatoon real estate market was showing signs of heating up a short work week brought unit sales back down to pre-spring levels. Local agents reported just sixty-five house and condo sales this week, down from ninety-four the week before and falling short of the seventy-four Saskatoon homes sold during the same week last year.

A short week didn’t keep prospective sellers from getting their property listed though. One hundred and forty-two properties were added to the MLS database as new listingsover the course of the week including one hundred and two single-family detached houses and forty condominiums.

The inventory of active MLS listings in Saskatoon moved higher for the ninth consecutive week pushing to 1,054 units, a gain of thirty-eight properties over the close of the previous week, but still down from this time in 2009 by nearly three hundred and fifty homes. As of today, there are 630 single-family detached houses for sale, up thirty-five from last week to mark the second consecutive week during which nearly all of the inventory gains could be attributed to this property type. There are currently 372 Saskatoon condos showing an active status, down from last week’s number by one. At this time in 2009 there were 859 detached houses and 453 condominiums for sale in the city of Saskatoon. 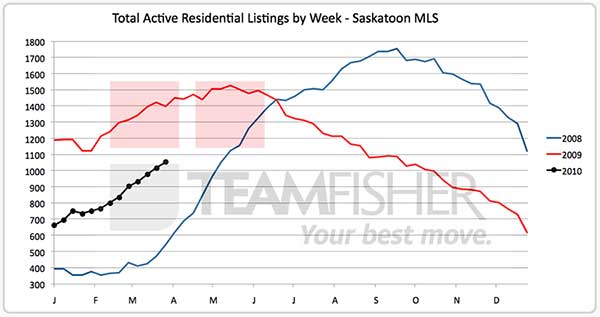 Cancelled and withdrawn listings matched last week’s number of twenty-four. Seventeen of those homes were immediately relisted on the multiple listing service to set their “days on the market” back to zero. An additional forty-two properties took a price adjustment this week.

Ten of sixty-five sales reported a final price that exceeded the asking price by an average of $7,743. I believe that’s the highest average overbid and the highest percentage of overbid sales to date this year. Three properties received particularly large overbids, the likes of which we haven’t seen in quite some time, producing numbers that were $16,000, $17,000 and $20,000 above list price. Remarkably, eight of the ten overbid sales were priced well above Saskatoon’s average selling price including three that topped the $500K mark to prove that even a price range swimming in excess inventory can catch a lucky break with some preparation and a sound pricing strategy.