Posted on May 26, 2012 by Norm Fisher, Royal LePage Vidorra
Posted in Market News

Over the past week, sales of detached houses and condominiums continued at a pace that’s typical for this time of the year. Saskatoon real estate agents reported 95 firm deals in those two housing categories to the Saskatoon multiple listing service®. Those numbers are down ten units from the previous week, but up 15 from sales recorded during the same week last year.

New listings of houses and condos came in at 150 properties for a week-over-week decline of just four homes but ended sharply higher than the 114 Saskatoon homes that were listed on the MLS® over the same period of time a year ago.

Quickly approaching the time of year at which the total inventory of Saskatoon homes available on the multiple listing service® tends to peak for the year, MLS® inventory failed to gain much traction again. The numbers grew by just 11 units over the course of the week to close at 1214, about 15 percent short of levels seen at the same point in 2011. Assuming that this trend continues, it appears that the current inventory line on our chart will break the bottom line to reach its lowest level for June in five years time. Today there are 733 single-family detached homes and just 399 condominiums bearing an active status on the MLS® system. At this time last year, we had 823 houses and 509 condos available to home buyers.

Overbid sales accounted for less than ten percent of our sales last week with seven sellers receiving an above list price offer. On average, those sellers netted an additional $5,012 above what they were asking. Another 11 decided to jump when their prospective buyer offered to pay the full price while 77 of the 95 firm deals reported by Saskatoon real estate agents this week came in below the asking price by an average of $8,118.

Other notable Saskatoon real estate activity this week included 44 canceled and withdrawn listings, just 9 properties that expired from the system without a sale and 33 price changes. 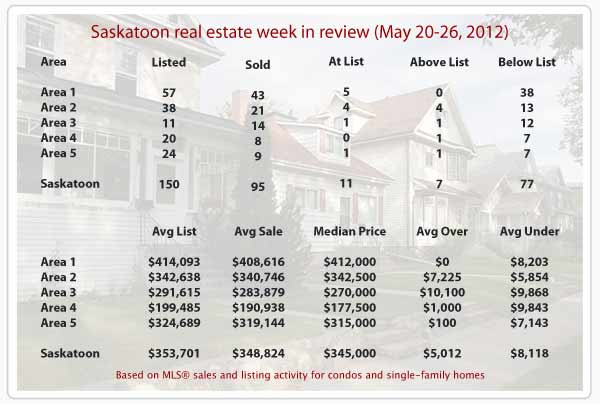