Saskatoon house and condo sale numbers moved in an upward direction for the second consecutive week. Unit sales in four of the five major real estate areas actually exceeded the number of new listings for the week. Overall, this was just the second week this year in which unit sales were greater than the number of new listings. Saskatoon real estate agents reported sixty-eight firm sales to the local MLS® to top last weekby fourteen homes and beating sales for the same week last year by seven.

New listingsslipped lower again with just sixty-six new MLS® listings (houses and condos) being processed throughout the week. That’s five fewer than were listed last week and just slightly less than the number listed during the same period last year when agents brought sixty-three properties to the market.

You may recall that last week, following seven consecutive weekly declines to the total residential inventory on the MLS® system, active listings increased by seven units to 1177. This week, inventory numbers got back on track and moved lower by forty-two properties to close at 1135, still twenty-nine percent higher than it was at this time last year when just 882 Saskatoon homes showed an active status on the multiple listing service®. 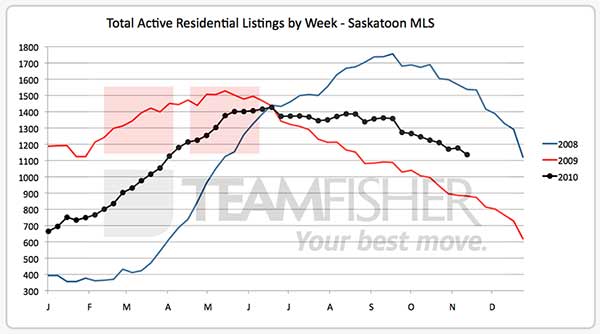 Thirty listings were either cancelled or withdrawn this week. Twenty of those found new life, and a new MLS® number as they returned to the system, most sporting a new, lower price. An additional fifty-six Saskatoon home sellers adjusted the asking price on their property this week, with all but four headed in a downward direction.

Spurred by a higher share of sales at the upper end of the market, the average selling price of a Saskatoon home pushed up again for the fourth consecutive week to reach its highest point in ten weeks at $324,332. That number falls short of the year’s previous high by just twenty-two hundred dollars. The six-week average sale price also moved toward previous highs for the year reaching $308,239 to claim a gain of roughly sixty-five hundred dollars for the week and growing more than thirty thousand dollars, year-over-year. The four-week median price continued to curve higher reaching $290,000 to finish the week up nearly eight thousand dollars from last week and ahead of last year by fifteen thousand.

Looking back at activity over the past three weeks compared to the same period in 2009, we see an overall decline in sales of ten units to 171 homes. More importantly, there is a significant shift in terms of the value of the homes trading. Sales priced below $300,000 fell by twenty-two units, sales between $300,000 and $400,000 remained fairly stable with a loss of just two, whiles sales above $400,000 increased by fourteen. These shifts in which price ranges are most active are skewing averages higher.

Saskatoon home buyers had a better week at the negotiating table as sixty-two of sixty-eight sales were closed below the asking price by an average discount of roughly 3.2 percent, or $11,004. Four sellers managed to get their price and two did just a little bit better than that, topping their asking price by five hundred dollars. 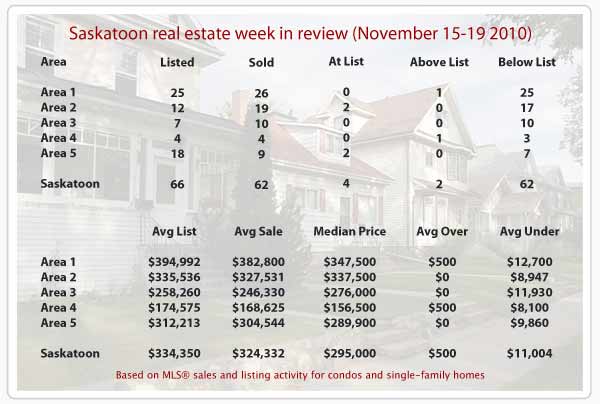 Our Saskatoon home search tool offers MLS® listings from all real estate brands with the most detail and information available anywhere. Check it out here.

Licensed in 1993, Norm brings a wealth of experience to TeamFisher. He has worked in every imaginable capacity including sales agent, office manager, team leader, broker and now, broker/owner. Norm has written a weekly review of the Saskatoon real estate market for more than 650 consecutive weeks which may make him the most consistent industry blogger in the world.Less...

Licensed in 1993, Norm brings a wealth of experience to TeamFisher. He has worked in every imaginable capacity including sales agent, office manager, team leader, broker and now, broker/owner. Norm has written a weekly review of the Saskatoon real estate market for more than 650 consecutive weeks which may make him the most consistent industry blogger in the world.