Welcome to the City Park Area of Saskatoon 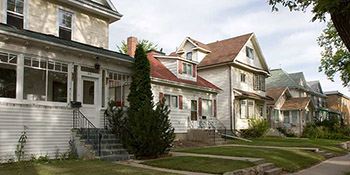 Welcome to the City Park neighbourhood, one of Saskatoon’s original residential subdivisions. City Park is located just north of 25th Street and the Central Business District. The area's neighbour to the north, just beyond 33rd Street is North Park. Its western border is just to the west of and includes both sides of 1st Avenue North. The South Saskatchewan River flows along its eastern boundary.

The earliest development in the City Park area of Saskatoon began during the first decade of 1900’s but a good two-thirds of the homes that exist in the area today were constructed after 1945. Some new building continues there today as old homes are removed to make way for newer modern structures in this classic, high-demand area of our city. Signs of major renovations are often seen as young singles, couples, and families discover the beauty of City Park. This area has experienced a real renewal over the past twenty years, yet it seems to have managed to maintain its original charm and character.

City Park boasts a fabulous location at the edge of Saskatoon’s downtown core. The area’s proximity to the river makes Meewasin Park a natural for those who like to bike, jog, or walk. You’re literally moments away from near endless lengths of paved trails. Take a walk to the northeastern tip the area and enjoy a stroll across the old CPR Bridge or the Riverwalk Promenade. The Realty Executives Boardwalk provides access to Saskatoon’s weir where feeding pelicans can often be seen up close.

There’s no shortage of park space in the City Park neighbourhood with nearly fifty-four acres committed across four major public parks including Meewasin Park, the beautiful Mendel Park Site, Wilson Park, and the recently revamped Kinsmen Park. Between them, residents and visitors enjoy a small amusement park with a Ferris wheel, merry-go-round and a train ride, numerous playgrounds, baseball diamonds and soccer pitches, a water park, ski trails, kilometers of paved walking trails, and numerous vantage points to enjoy the spectacular views that City Park has to offer.

City Park has a relatively low population of children, so there are no elementary schools in the area. Children living in the area are taken to schools in both the public and catholic school system by bus. The University of Saskatchewan campus is just at the top of the 25th Street Bridge so walking and biking are popular for both students and faculty.