Welcome to the Montgomery Place Area of Saskatoon 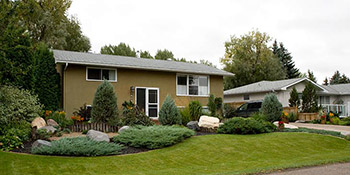 Located at the south-west edge of Saskatoon, Montgomery Place is a residential neighbourhood that was developed after World War II as part of the Veteran's Land Act settlement plan. The area was developed for Canadian veterans in honour of their heroic service to their country. The streets are all named after famous battles that these brave soldiers fought. The public parks bear the names of Canadian war heroes.

When it was originally developed, most of the land parcels were approximately one-half acre in size and that gave Montgomery Place a unique sort of feel, particularly after it was amalgamated with the city of Saskatoon in the late 1950's. While many of those large parcels have been subdivided to make way for more modern homes Montgomery Place has managed to retain much of its original charm. Many of the streets have no sidewalks and visitors often comment that the area has an "at the lake" feel to it.

Montgomery Place has two elementary schools including St. Dominic in the catholic system and Montgomery School in the public system.

My parents still reside in Montgomery and I had the privilege of growing up there. It’s almost 20 years since I moved from home but the neighbourhood has not changed and that is a good thing. You still feel like you're part of a country town even though your actually part of a growing busy city. The friendly atmosphere is still there and many of the people you grew up with still live there. It is a very family orientated place.