Welcome to the Queen Elizabeth Area of Saskatoon 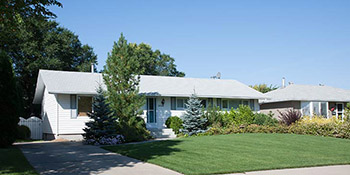 The Queen Elizabeth neighbourhood is a residential area located in south-central Saskatoon. The largest percentage of the development that exists there today occurred during the 1950's and by 1970 the area was roughly eighty percent complete. Of the 1,030 households in the area nearly 700 are single-family detached houses. The balance is roughly split between town homes and two-unit dwellings. There are only twenty apartment units in the area.

The neighbourhood has two schools, both in the public school system. Queen Elizabeth School provides instructions to children in kindergarten through grade eight, and Aden Bowman Collegiate looks after those in grades nine through twelve. Children learning in the catholic school system are taken to nearby schools by bus.

Queen Elizabeth has just one park with ten acres of green space. Recreational amenities include basketball, soccer and volleyball facilities, a playground and walking paths.