Welcome to the Riversdale Area of Saskatoon 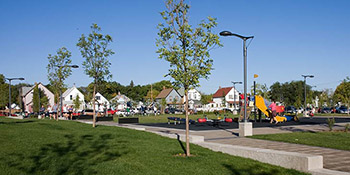 Riversdale is a core neighbourhood located in central Saskatoon just to the west of the Central Business District. It's one of the city's lower-income areas, and home prices reflect this. Over sixty percent of Riversdale’s residents rent the home they live in.

Settlement began in this area in the late 1800's. Riversdale was actually incorporated as a village in 1905 and later joined with Saskatoon and Nutana to incorporate as the City of Saskatoon in 1906. By 1945, some fifty-five percent of the area was fully developed and much of the remaining land was spoken for by 1960. Roughly two-thirds of the nearly 900 homes in Riversdale are single-family detached houses. There are 167 apartment units and nearly eighty two-unit dwellings.

As one Wikipedia contributor said, "Riversdale has struggled in its recent history, with a sizeable portion of the population living below the poverty line. The social ills that accompany poverty - substance abuse, violent crime, and dilapidated housing - have often cast the area in a negative light. However, by 2009 there was evidence of gentrification occurring of the area."

Truly, there have been several positive developments in recent years that affect Riversdale. Much of 20th Street has been redeveloped and some measure of vitality has returned to the business district. The Farmer's Market located at 19th Street and Avenue A is alive with excitement on the weekends. Given its prime location on the west bank of the South Saskatchewan River and its close proximity to River Landing, it would be great to see the area continue to improve.

Homes for Sale in Riversdale, Saskatoon

Hello, just to echo something I’ve posted elsewhere on the site:

I’ve lived in Riversdale for the past 3 years, and honestly, I’ve had almost no problem at all. There’s a former Sask Premiere a few houses down, my neighbour is a publisher, his wife is a curator of a Saskatchewan Art Gallery, my other neighbour is a helpful fellow who takes out my garbage when I forget, and that’s just within a few houses of mine. People in the area are quiet and friendly and while I can understand why people are hesitant at first because it is in transition, you seriously can’t find housing this affordable, close to walking distance downtown, right beside the most scenic park in Saskatchewan, a few blocks from the farmers market, etc. anywhere else in Saskatoon. Even Broadway is only a 15 min walk away.