Welcome to the Sutherland Area of Saskatoon 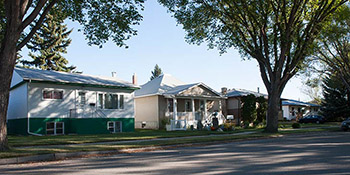 Sutherland is truly unique among Saskatoon neighbourhoods in that it’s the only area of our city that hasn’t been a part of our community from its own beginning.  Homesteaders settled on the land that is now Sutherland in the late 1800’s.  In the early 1900’s the land was used as the Canadian Pacific Railway yards, operating just a few miles outside of the Saskatoon city limits. In 1909, Sutherland was incorporated as a village and by 1912 population growth allowed it to be incorporated as a town. In 1956, the town was annexed by the City of Saskatoon becoming the city’s eastern most neighbourhood until the early 1970’s when the Forest Grove subdivision began to develop.

Today, Sutherland is bounded by Circle Drive on the west, by Attridge Drive on the north, by Central Avenue on the east and by College Drive on the south. It’s one of just a few Saskatoon neighbourhoods, which enjoy the closest possible proximity to the University of Saskatchewan campus. College Drive provides easy access to the downtown Saskatoon core and the "big box" retail centre known as Preston Crossing is just a short drive away.

Sutherland is primarily a residential neighbourhood. All of its commercial property is organized along Central Avenue giving the area a bit of a small town "Main Street" kind of feel. The area’s close proximity to the university campus makes it quite popular for students who are renting. Consequently, well over half of the dwellings within Sutherland are apartments, duplexes, row houses, and mobile homes.  Most of the rental stock is located north of 115th Street, while the homes on streets east of that line are mostly single-family dwellings.

Homes for Sale in Sutherland, Saskatoon

Sutherland is a very interesting neighbourhood. There is a quite a lot of history combined with a strong urban renewal. It’s convenient to the University (20-minute walk, 3 minutes by car or bus) and downtown (7 minutes by car or bus). Preston Crossing is very close by and the airport is less than 10 minutes away. The soccer centre is 5 minutes away and there are indoor and outdoor skating rinks within the community. The neighbourhood has a good mix of older people and young families. Central Avenue has a number of good restaurants and Sutherland even has its own craft brewery!