Welcome to the Willowgrove Area of Saskatoon 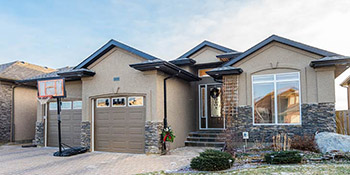 Willowgrove is a residential subdivision located in northeast Saskatoon. Development began in 2003 and has moved at a rapid pace since that time. The neighbourhood plan includes a village centre, an integrated community centre, a core park and a linear park system that winds its way through the area.

The Province of Saskatchewan recently built two elementary schools that exist under one roof, sharing space with a civic facility, similar to what we've seen with the Shaw Centre and the two new schools in Blairmore. The integrated civic/school facility was built across from Village Square, next to Wallace Neighbourhood Park. This core park will offer residents a softball field, a soccer pitch, and an open play area. A toboggan hill will be located in the centre of the park. Future plans also include an accessible park and a water feature to be located behind the integrated facility.

Homes for Sale in Willowgrove, Saskatoon

One of Saskatoon’s newest neighbourhoods, Willowgrove is a well-designed mix of good planning, good design, and prestige that promises to make it an exceptional Saskatoon neighbourhood as it continues to develop.

The first Willowgrove lots were made available in 2003, and as of January 2011, all phases have been offered for sale and only a handful of undeveloped lots remain.

Having been in Willowgrove for over a year (after trying out Stonebridge for a year), we are thrilled with the neighbourhood and plan to stay here indefinitely.

Commute: Although Willowgrove is Saskatoon’s Eastern-most neighbourhood, near-direct access to Attridge (and from there Circle Drive) and Highway 5/College Drive means that commute times are surprisingly manageable. Rush hour on Attridge Drive is getting a bit hairy, with that artery serving several neighbourhoods now, but alternate routes are still quite quick and convenient. It’s a bit of a hike to get downtown and bus routes still need improvement, but overall we’re very happy with the location of Willowgrove (a concern for us when we were considering relocating from Stonebridge).

Neighbourhood mix: A good mix with many townhomes but also many walkout McMansions and regular single-family homes. A few more multi-family developments are still to come, but overall a good community mix.

Services: An enormous commercial development is only partially complete, and promises to provide Willowgrove/Silverspring/Arbor Creek/Erindale with a strong mix of stores and services (so far it’s mostly just big chains, but apparently there are plans for a bunch of local businesses as well). Already the area has a few restaurants and shops, a full grocery store (Co-op), multiple gas stations, a liquor store, etc. The soccer centre is nearby, as are approximately 150 various banks.

Schools: A new elementary school has been confirmed for Willowgrove for 2012/2013. Until then, Willowgrove kids are bused to Forrest Grove Elementary. Our daughter has been going to Forrest Grove for this whole school year on the bus and we have been very happy with the school. It has a very strong Principal, some great programs and what seems to be an excellent environment. Bus service is not door-to-door, but is close and has been good.

Green space: Perhaps the best part of Willowgrove is the substantial, interconnected park system. This system serves a few purposes – it provides drainage for the neighbourhood and creates a whole bunch of expensive walkout lots, but also makes for an exceptional environment for walking, biking, sledding, strolling, etc. The design of this park system means that virtually every lot in Willowgrove is very close to green space of some sort. Add to this a splash park, a tobogganing hill, and two playgrounds and you’ve got a pretty substantial park system that has been awesome.

Homes: Generally some of the highest-priced homes in Saskatoon, but also there are plenty of good deals to be had in Willowgrove. If you’re looking for something new (obviously there are not many mature trees, yards, etc. out here yet, and plenty of construction zones), this neighbourhood is a good bet.

Overall: We felt that Stonebridge suffered from too much sameness (to be expected in a developer-engineered community) and not enough green space. We loved the location of Stonebridge and were concerned about losing out on that good access but it turned out not to be an issue. Willowgrove doesn’t suffer from that uniformity and probably has the best greenspace plan of any Saskatoon neighbourhood. Overall, we have almost no complaints about Willowgrove and think it is an exceptional Saskatoon neighbourhood!